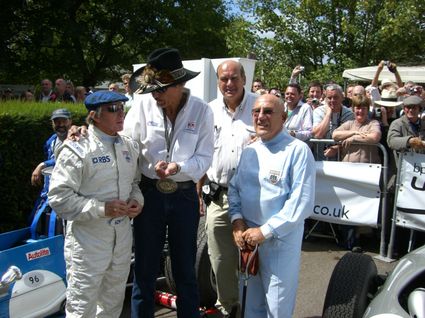 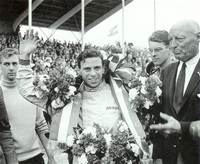 My name is Peter Kanger and I have collected F1 autographs since 1963. I live in Zandvoort in The Netherlands where we had the Dutch GP during the period 1952-1985, and since 2021 the Dutch GP is back again in Zandvoort. I saw my first GP in 1958 and in 1963-1964 and 1965 I was assisting the famous Lotus team (Colin Chapman and Jim Clark). It was in 1963 that I started to collect autographs and of course the very first one was the autograph of Jim Clark who was my hero in that time. You can see me standing on the left side of the small photo next to Jim Clark - Dutch GP 1964. I visited many autosport events all over the world such as: F1 GP - GP2 - F3 - DTM - CHAMPCARS - DTM - WTCC - SUPER LEAGUE - A1 - GPM - WRC and also many F1 and GP2 tests and historic F1 races. I also try to visit every year the Festival of Speed (FOS) at Goodwood in the UK this is an event that an F1 collector may not miss.

It is impossible to show all my F1 autographs, but you will find a short impression of it on this website.

My collection is stored in an office building where the temperature and humidity are fully controlled. In this room my collection is safe which is especially important for the very old photos (often signed in ink).

In my youth I drove karts for 4 years and won more than 65 trophies. I was also rather successful in rallies and classic rallies. My last championship was in 2004 - the Dutch classic rally championship. Y ou will understand that I am not so young anymore but even at 75 you can still feel young.